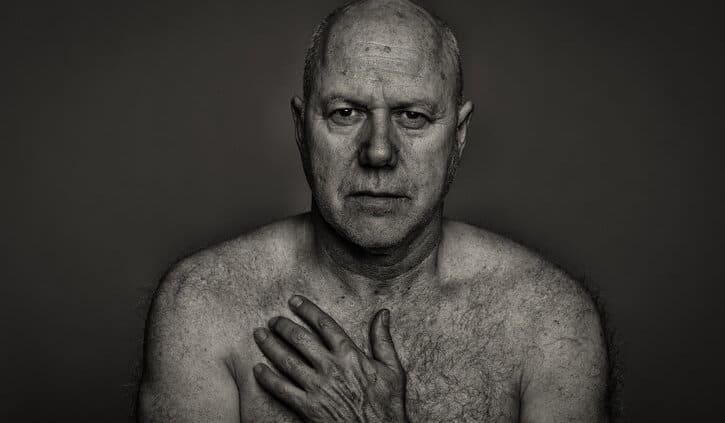 ‘Bare Truth’ is a compelling collection of portraits of New Zealand men. The extraordinary photographs expose the men who are very humble, courageous and vulnerable. Their edgy portraits are presented in monochrome which emphasizes their shape and form. The simple background eliminates distractions so the viewer can focus on their bodies and facial expressions.

The combination of using a soft directional light while adapting a special post-processing technique, enables me to enhance their body features so the images are raw and crisp. It is important to me to capture a highlight in their eyes so they look directly at the camera – the eyes are the first thing we notice and must be sharp.

The idea of creating a series of photographs showing men who expose their bust evolved gradually. The biggest challenge was finding the first person to agree to pose. After a few rejections and setbacks, I created a portrait with a close friend and became really engaged with looking into his eyes.

At first I asked only close friends to participate. After gaining valuable experience and formalising a consistent look, I expanded the portfolio and became confident in approaching total strangers. Having a few examples helped me to overcome objections until the project gained a critical mass with dozens of portraits. I focus on capturing a variety of ethnic groups, poses, age groups and body sizes.

I gradually became more selective and started approaching people who looked more interesting to me – people whose face and body tell a story. I capture around 50 photos of each man and use a selection process in order to choose the image which best represents his personality. While some people are very comfortable posing without their top, others feel this is completely outside their comfort zone and a few view it as a therapeutic experience.

The project gained further momentum after winning prestigious awards and becoming a Finalist in the Portrait Classic category of the 2015 Iris Awards form the New Zealand Institute of Professional Photography which then awarded me the title: ‘2015 Auckland Photographer of the Year’. The portfolio was first selected to be exhibited at Northart Gallery during Auckland Festival of Photography. It was later selected to show at the annual Head On Photo Festival in Sydney during May 2016.

Many thanks to Ron Brownson, Senior Curator of New Zealand and Pacific Art at Auckland Art Gallery, who critiqued my initial project during 2015 Auckland Festival of Photography and inspired me to continue and expand it.